Karin Nakagawa was born in Tokyo and raised in Ibaraki-Japan. Today she lives manly near Burghausen in Germany and in Yokohama-Japan.

Being raised in a family of musicians she started learning the piano at the age of three, and changed to the study of the 25-string Koto at the age of 12.
By the age of 14, she had already played her first Koto concert featuring her own compositions.

She studied at the „Tokyo University of Arts“ the traditional „IKUTA-Koto and the JIUTA-SANGEN Style“ (traditional 13-string Koto, Shamisen & Japanese singing).
After graduating, she began performing as a „Storyteller“ with her 25-string Koto and has been seeking new means of expression by working with various artists from different fields, developing her own singing style in the process.
Today she has become mainly one of the very few experts of the 25-string Koto, inspired and taught till today by her Master, the well known Japanese Prof. Keiko Nosaka (Souju Nosaka). 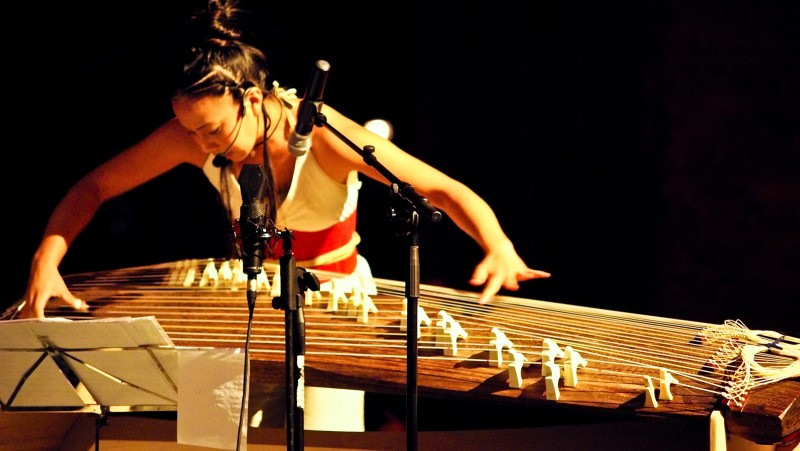 Being always well known for her versatility in improvisation, Karin collaborates with musicians from Eastern-, Western- and Folk traditions, as well as Jazz and Contemporary styles. Not being limited to speciﬁc genres or ﬁelds, she also collaborates with Storytellers, Actors, Dancers and Painters… etc. from all over the world.

As the winner of „the Best Debutant in Music 2009 – Japan“, she has also collaborated with Pop musicians such as:
„Porno-Graffitti“ – she appears on the limited edition DVD – „∠TRIGGER“ 2010,
„Ikimono-Gakari“ – recorded on the Album „Hajimari-no-uta“ 2009.

Thus far, Karin has held concert tours in over 20 countries around the world, having lead and composed a big number of various performing acts, including tours sponsored by the Japan Foundation such as those in: Sweden 2000, in Africa 2007 and in Southeast-Asia 2010.
Since 2013 she is also collaborating and touring with the well known Swedish musicians Lena Willemark and Anders Jormin to present the Swedish Grammy Award 2016 winning Album “ Lyöstraini – Trees of Light “ – released together in spring 2015 with ECM-records.

Through her roots in the ancient music of Japan -the sound of the wind and the rain, and songs sung during the planting of rice- as well as through her unique and emotional way of performing the Koto with her voice, Karin continues to spread the essence of Japanese soul and heritage to the whole world.